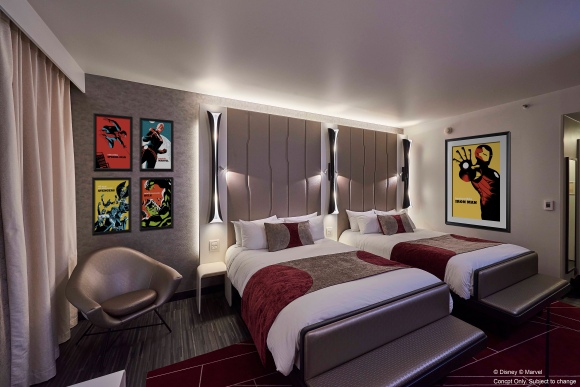 Can you explain the concept of the future Disney’s Hotel New York – The Art of Marvel to us?

When it re-opens, the Disney’s Hotel New York – The Art of Marvel will evoke the contemporary sophistication of the city that was the birthplace of the Marvel Super Heroes, and the scriptwriters and artists who created them. So the renovation of Disney’s Hotel New York is based on an environment inspired by the luxurious and contemporary buildings of Manhattan! The refined and cosmopolitan interior decor will evoke the neighbourhoods of the Avengers and will display “The Art of Marvel” in public spaces. “Comic art” posters, sketches, videos, storyboards, sculptures and costumes are the many examples of the Art of Marvel that will be included in the hotel’s overall decor, just like a contemporary art gallery in Chelsea.

What inspired you in your new designs for the bedrooms?

The hotel has 476 standard rooms, 65 executive, 15 themed suites, 8 “standard” suites and 2 presidential suites. The interior decor of the bedrooms will be inspired by the urban contemporary and sophisticated style of Tony Stark, with a range of colours and finishes evoking Iron Man! The themed suites will be inspired by the world of Spider-Man and the Avengers, whilst the “standard” and presidential suites will have a more neutral decor in order to welcome our Convention clientele. As in the rooms, limited editions of the Art of Marvel will decorate the hotel’s walls, as if they were exhibited in an art gallery.

Apart from the design, are there any details that you would like to share with us relating to improving the comfort of the rooms and suites?

Apart from evoking the Marvel Super Heroes, the rooms and suites will provide larger flat-screens hidden behind a mirror, all the necessary European connections and sockets, along with a brighter bathroom with a bath or shower.

Are you excited about the new hotel design?